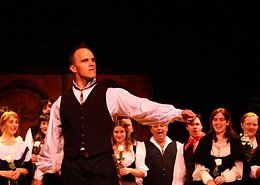 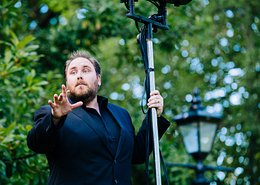 Since returning to Australia, I have worked with the team at Verve Studios to develop and deliver educational programmes to professional actors in Melbourne.

Verve Studios is Melbourne’s Premier Centre for Actor Training. It is committed to excellence in training and preparing students to work in the industry.  Verve Studios' staff includes some of Melbourne’s most sought after actors, creatives and industry professionals.

As part of my time with Verve Studios, I also produced a number of theatrical productions and short films with some of Australia's most exciting up-and-coming artists and established industry professionals.

I graduated with Distinction and a DipRAM from the Opera Programme at London's Royal Academy of Music. Before moving to London, I was a Young Artist at Opera Queensland and then continued my language and vocal studies in Milan, Italy.

When not singing operatic roles, I am lucky enough to have had an equally distinguished career on the concert platform, having performed countless oratorios and concerts around Europe and Australia.

I am currently enjoying singing with the dynamic and innovative ensemble,

The Parlour in concerts and recitals around Victoria. The Parlour is currently an Artist in Residence at the Melbourne Recital Centre as one of its Local Heroes.

In 2009, I started my own production company in the UK, Opera Novella, which produced full operas, gala concerts and corporate shows across Europe.

We worked with some of the best artists in the country and specialised in creating bespoke productions for festivals, theatres and private events.

In 2014, I returned to Australia to join Melbourne's CitiOpera as General Manager. Since then, I have had the pleasure of producing a number of highly successful operas and concerts for them as well as helping to reinvigorate the CitiOpera brand.

I was elevated to the Board of CitiOpera in 2015 and continued to drive the company forward artistically and operationally with a pasionate and talented team.

In 2016, I joined TEG Life Like Touring as Executive Producer, working on projects across Australia and around the world. Life Like Touring is best known for its theatrical productions, but in more recent times they have produced a variety of unique branded experiences. Life Like Touring was aquired in 2016 by TEG Live and became part of Australia's leading integrated live entertainment solutions company, with superior capabilities in ticketing, digital, data and the promotion of live sport and entertainment.

In 2020, I began working with the City of Boroondara to lead a number of their special projects, including the Boroondara Eisteddfod and Summer in Park series.